Anyone who has taught worship dance to children has experienced one of these challenges:

I have a section in my online class Teaching Worship Dance to Children entitled Using Props with a Purpose. In it, I give suggestions for teaching children how and why to use props in such a way that they are tools for ministry and not toys. It’s a helpful section to head off the problems listed above before they happen or how to use them as teachable moments if they do. 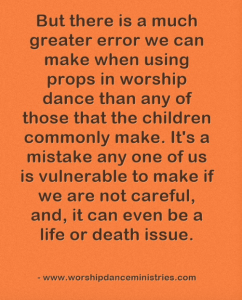 But there is a much greater error we can make when using props in worship dance than any of those that the children commonly make. It’s a mistake any one of us is vulnerable to make if we are not careful, and,  it can even be a life or death issue.

To understand it, let’s look together at a story in 1 Samuel 4 that pierced my heart when I read it yesterday during my devotions.

Before this story begins, the Lord has already revealed to Eli through an unnamed man of God and then through Samuel, that His wrath is coming on Eli’s family.  Eli’s sons have treated the offering of the Lord with contempt and exploited the people by taking more than the priest’s share of the offerings. Because of their actions, scripture writes, “men abhorred the offering of the LORD.” (2:17)

Chapter 4 begins with Israel going against the Philistines and being “smitten before (them).” (v. 2) So, the people gather to decide what to do and the elders came up with a plan. They said, “Let us fetch the ark of the covenant of the Lord out of Shiloh unto us, that when it cometh among us, it may save us out of the hand of our enemies.” (v3)

At first glance, it seems like a spiritual plan. They know they need the Lord’s help to defeat their enemies. They know there is a connection between the ark of the LORD and His presence, and so they bring it into battle. As they approach the battle, they let out a great shout, the same “Rua” they let out before the walls of Jericho fell down. (Joshua 6:5)

But instead of destroying the Philistines, the Israelites found themselves “smitten” and “slaughtered” (v. 10).

You probably saw just what I saw: The Israelites had said to themselves, “Let us fetch the ark of the covenant of the Lord…that…it may save us out of the hand of our enemies.” (emphasis mine)

They thought the ark would save them. The thought the power was in the object. They thought that because God had worked powerfully in their presence in the past through the ark, they could use the ark as they chose to coerce God to do their bidding. 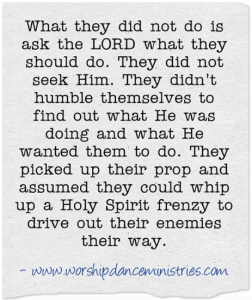 What they did not do is ask the LORD what they should do. They did not seek Him. They didn’t humble themselves to find out what He was doing and what He wanted them to do. They picked up their prop and assumed they could whip up a Holy Spirit frenzy to drive out their enemies their way.

Likewise, many of us have seen the LORD work powerfully when we have waved a flag, raised a banner, blown a shofar, or shaken a tambourine in spiritual warfare and worship. But we must remember that the objects themselves do not contain the spiritual power. They are only powerful as a point of contact for the LORD to work, through faithful people acting in obedience to His insructions.

As Lynn Hayden says in Processionals, Props and Pageantry, “…when we carry flags, streamers , cloth, and even beautiful banners, it is not those articles of worship that perform the miracle, but is the almighty God who works through a vessel who is obedient to do His work.”

Or, as the commentators of my bible write, “They (the Israelites) incorrectly believed the the LORD’s presence with the ark was guaranteed, rather than being subject to His free decision. They reflect the pagan notion that the deity is identified with the symbol of His presence, and that God’s favor could automatically be gained by manipulating the symbol.” (Zondervan, King James Study Bible, study notes)

So, as we enter into worship, ministry and warfare through our dance, let’s remember that the power isn’t in our props (or in our movements). The power is the LORD’s to release as He wills. The safest, most powerful place to be is not with a prop in hand or overhead, but in relationship with the One who holds the power.

Thank you for taking time to read this and for letting me be part of your life. I’d love to hear from you. Join the conversation by responding in the comments to one of these questions?

How do you decide which prop to use and when?

Do you have a story of God working powerfully through you when you used a prop in worship in response to His direction?

Have you ever had a time when you felt your dance/ministry piece fell flat or even did harm because you were operating from your own ideas of what should work? How did you turn around?

21 thoughts on “What not to do with worship props”