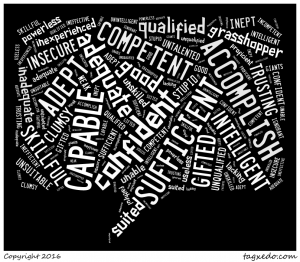 Do you see yourself as capable?

How confident are you that you can complete the tasks you believe God has given you?

What do you tell yourself about yourself?

As worship dancers, our confidence is so often under attack. We often question our sense of call and whether we are worthy of the assignments we feel called to.

God cares very much about how we see ourselves. What He wants from us and for us is often different and always better than what we believe or deserve.

In this post, I’m going to share about a phrase from the bible that challenged me to change the way I think and speak about myself. I’ve got a gift for you in the post as well.

I’ve been using a French bible for my devotions this year. Dance and
French are my favorite languages. Reading scripture in French slows me down and causes words and phrases to jump out at me in new ways. That happened this week.

You are probably familiar with the story of the twelve spies that Moses sent to explore the land of Canaan in order to bring back a report to the Israelites about the land the LORD had promised them. Ten come back with tales of distress. They report that the land may be fruitful, but its inhabitants are large and threatening, too much for the Israelites to conquer. Two return full of hope and promise. One of them, Caleb, says, “Let’s go conquer the land,” (“Allons-y, faisons la conquête de ce pays.”)

It was his next words that jumped off the page and smacked me in the face. They read, “car nous en sommes vraiment capables.” You don’t have to speak french to recognize the word capable. The phrase translates, “for we are truly capable of it.” (emphasis mine). This was the report that pleased the Lord. They believed they were capable of taking what He had given them. They believed they were capable. 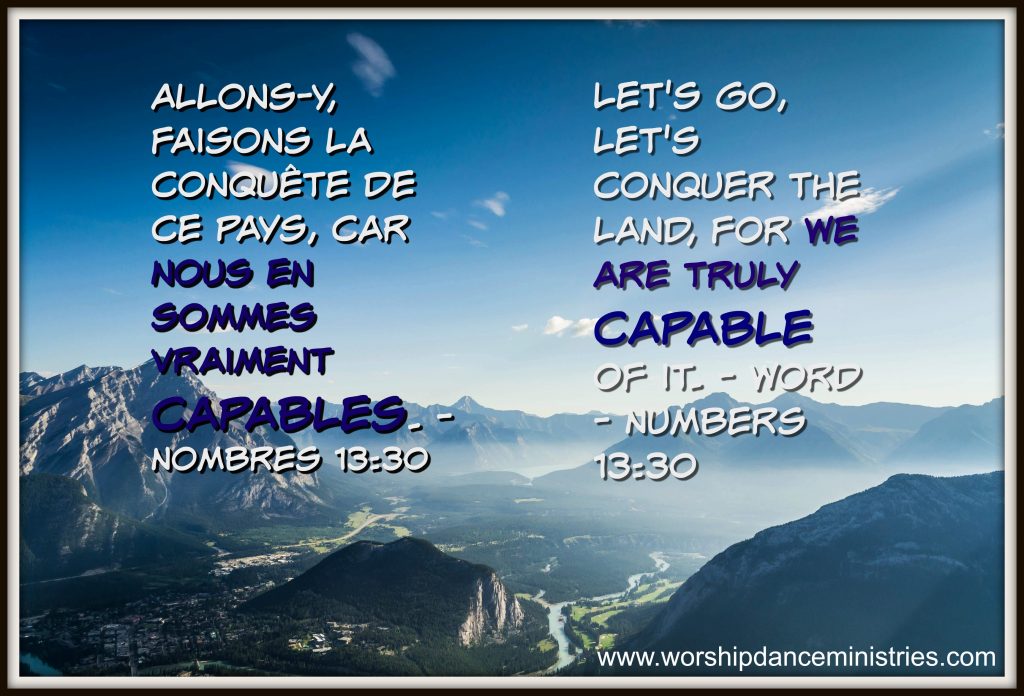 These words smacked me on the face because they are so rarely mine. I identify too readily with the ten spies. I identify with the ones who saw the obstacles, who were most mindful of their own weakness, and who assessed the situation by what they knew of the circumstances and their own limits. I have too often seen this as being realistic, being practical, even being humble. I imagine that is just how the ten saw the situation.

They couldn’t believe that God’s plan for them was as good as it was, so they focused on their own weaknesses.

This realism and humility, however, didn’t please the Lord. 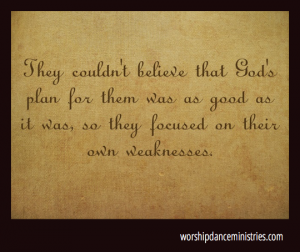 The Lord was pleased with the ones who said, “Let’s do this. We are capable.” (paraphrased). That is the mindset of faith. We know their confidence wasn’t in their own abilities, that it was in the Lord’s promise and His ability to work through them. Nonetheless, they said, “We can do it;” “We are able;” “We are capable.”

They believed that God had good plans for them. Therefore, they understood that any obstacles to getting there were God’s problem, not theirs. So they were unafraid to move forward.

Again I ask, “What do you tell yourself about yourself?”

Do you say, “I am capable”? Do you move forward with what you believe He’s called you to do with the confidence that you are “well able to conquer it?”

Or do you say, like the ten, “I am not able,” “I don’t have what it takes (the time, the money, the training, the connections, the skill, the aptitude),” or, “I’m like a grasshopper compared to them”?

Don’t let the enemy deceive you. Those thoughts are not humility, nor are they realistic. They are not even your own thoughts. They are the ideas whispered to you by the enemy whose goal is to steal, kill and destroy the plans God has for you, to keep you from your inheritance.

I wrote Caleb’s words on the front cover of my journal so that I might read them over and over, to impress them on my heart and mind. “J’en suis vraiment capable.” I am truly capable of it, truly capable of taking the territory He has for me.

I created two graphics for you of these verses to help you hold onto this word.

Choose the one you like best. Click on the image. Download it. Make it your lock screen or your Facebook cover (you can align it so my web address doesn’t show on your cover) or print it out and put it on your mirror. You are capable because He is capable and He has territory for you to conquer.

Take a minute and share in the comments. We’d love to hear from you:

How do you talk to yourself about your abilities? What has the Lord spoken to you about His calling on your life?

What is He saying to you today?

Do You Recognize the Voice Speaking to You?
When is it Okay to Give Up?
Doors Open When We Say Yes.
Movements of Breakthrough
How Do You Know if You are Called to Dance Ministry?