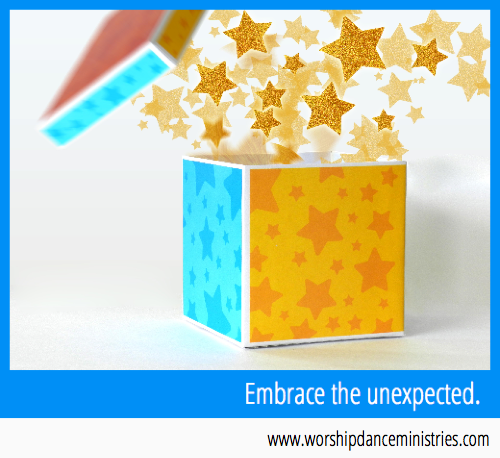 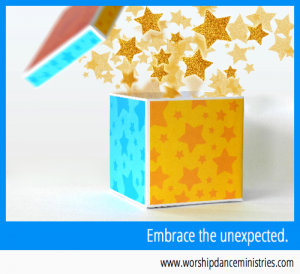 My son: I have the hiccups

Me: I’m sorry. I hate the hiccups.

My son: Because they are unexpected.

This little conversation has been ruminating in my heart and mind every since I had it with my eleven year old. I never would have thought to appreciate hiccups because they are unexpected. In fact, more often than not, I curse the unexpected:

The car overheats on the way up the mountain…A neighbor knocks on my door when I’m up on the ladder making great headway on my painting project….My nine year old asks me to take a bike ride just as I’m sitting down at the computer to write a blog post….A child wakes up sniffing and coughing on a school day when I had my todo list all laid out with projects to do without children…. The list goes on.

But hearing my eleven year old say, “Because they are unexpected,” with a lilt in his voice has left me smiling and thinking.

Embrace the unexpected. That’s what I felt like the Lord was saying through this interaction. Don’t curse it. Don’t even just tolerate it. Embrace it.

Here’s how some of those unexpected moments in the past month played out:

We pulled off the road on the way up the mountain to see steam pouring out of our engine. It flashed through my mind that the long awaited retreat at Big Bear Lake with our church  might happen without us.

Not two minutes later, though, the man in the car behind us at the service station asked, “Is everything okay?”

It turns out he was a mechanic. And a Christian! He looked over the engine, told my husband to add a quart of oil, and assured us that there was nothing else wrong and we could drive on. A Christian mechanic, right behind us, at that moment. That was the Lord, telling me He had our backs, that He was providing for us. Thank you, Lord….

My neighbor stopped by to invite us to a party and to ask if I would help her daughter and her three friends work out some kinks in a dance they were preparing for their school talent show. I climbed off my ladder, wrapped my paintbrush in plastic wrap, and that hour working with those four girls was the highlight of my day. It gave me so much joy to spend an hour with young girls who love to dance. The Lord set up that gift for me. And, you know what? I did get the wall painted by nightfall….

The bike ride with my nine year old was the highlight of another day, a day in which I had buried myself in what I felt needed to be done. The fresh air of that ride, the bit of exercise I got, and, the best part, the 15 minutes I spent talking and laughing with him, completely changed my mood from one of heaviness to joy and thankfulness.

There are more times than I’d like to admit when I don’t embrace the unexpected. I told my sniffling son he could rest, while I worked. I let him do what school work he could on his own while I typed away, chipping away at my todo list. I got some valuable tasks accomplished, but I had a heaviness of heart that didn’t leave that day. I went to bed a bit frazzled, wishing I had accomplished more. I wonder if there was something unexpected planned for that day that I chose to have nothing to do with.

This all reminds me of a song that a friend of mine, Douglas Eltzroth, wrote called, “Jesus at the Door.” In it, he sings, 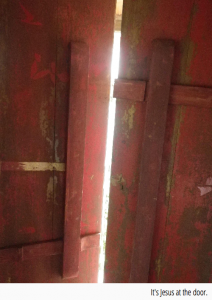 Do you hear the opportunity knock?

That’s Jesus at the door.

It’s Jesus at the door,

the designer of the season….

Open wide if you reason,

He is the Lord of occasions of life.

Do you hear the opportunity knock?

That’s Jesus at the door.

Can I hold this in my heart and train my heart to have a different response to the unexpected, to see the unexpected as a potential gift, a new experience, an opportunity to serve, a word from Him? Can you?

Please share in the comments how you respond to the unexpected.

Can you think of a time when something unexpected turned out to be Jesus knocking at the door?

How do you train your heart to embrace the unexpected?